As we edge closer to the end of 2019, it is time to take a look back at some of the most memorable matches of what was an eventful year for Borussia Dortmund. 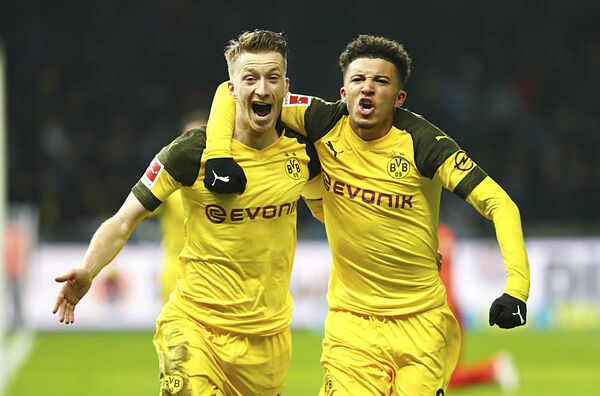 BERLIN, GERMANY – MARCH 16: Marco Reus celebrates with Jadon Sancho during the Bundesliga match between Hertha BSC and Borussia Dortmund at Olympiastadion on March 16, 2019 in Berlin, Germany. (Photo by TF-Images/Getty Images)

Away trips to Hertha Berlin have always proved to be tricky affairs for Borussia Dortmund. And last season’s comeback win against them was certainly a memorable one, especially considering the amount of injuries Dortmund had in their squad.

The Black and Yellows went behind in just the fourth minute, as Salomon Kalou continued his impressive streak of scoring against them. Thomas Delaney’s deflected strike from the edge of the box made it 1-1 just ten minutes later. But Hertha Berlin were then given a penalty, which Kalou converted to make it 2-1.

Lucien Favre’s men came back from the break looking to get back on level terms. And they were rewarded just two minutes into the half, when Dan Axel Zagadou got on the end of Jadon Sancho’s corner, before finding the net with a well placed header.

Borussia Dortmund kept searching for a winner, but came up against an inspired Hertha defence. But just when it looked like the match would end all square, Marco Reus scored with an exquisite first time finish to hand Dortmund what seemed like a vital victory in the title race.

Next: Dortmund dispatch Bayern in the Supercup
Next1 of 6Prev post
Use your ← → (arrows) to browse
Load Comments
Event Tickets
Powered by StubHub
Top Stories